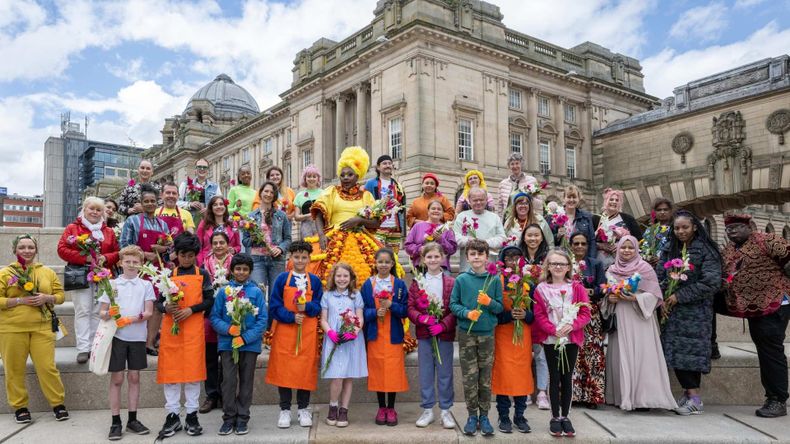 Today, 10th May 2022, hundreds of children and adults across Birmingham began growing flowers in preparation for the spectacular pop-up garden festival PoliNations taking place from 2-18 September. Produced by Trigger Collective as a part of UNBOXED: Creativity in the UK, PoliNations will turn Birmingham’s city centre into an urban oasis for a celebration of the cross-pollination that has shaped British culture.

Over the next 4 months, over 1000 people from 60 diverse community groups across the city will be growing calendula flowers, commonly known as marigold using the PoliNations Grow Packs with all the resources provided. The project will culminate in the co-planting of 600 marigolds in the magical PoliNations pop-up garden. After the two-week festival, all plants will go back out into Birmingham to re-green the city.

Open to all, PoliNations is part of the UK-wide UNBOXED: Creativity in the UK, and will bring the cultural programme for the Birmingham 2022 Festival to a spectacular close. Through free events, workshops, and performances including live music, dance, spoken word and drag, the festival will celebrate the beauty, colour, and diversity that makes up British horticulture and culture. Up-and-coming and renowned artists from Birmingham and beyond will perform under the shelter of giant architectural trees and surrounded by thousands of colourful plants.

The groups involved in the mass growing project reflect the diversity of Birmingham’s communities, ranging from youth to elderly groups, from expert gardeners to total beginners, including refugee groups, women’s groups, and disability action groups. Among the local communities involved include Saheli Hub, a women and girls group focused on community wellbeing; Kinmos, a mental health charity; Women with Hope, a charity dedicated to improving the lives of women asylum-seekers, refugees and migrants; Open Theatre, working with young people with learning disabilities on non-verbal physical theatre; the Czech and Slovak Club, which promotes the welfare and culture of the Czech and Slovak community living in UK; the volunteer growing group Highbury Orchard Community; and Birmingham Cathedral.

Amanda Clinton, a youth leader involved in the project with The Factory Young People's Centre, said:

“It’s fantastic to be part of this PoliNations project. Gardening has helped me through difficult times and I want to teach my young people the mental health benefits of gardening, by getting outside with them and growing for PoliNations. We can’t wait to see our marigolds flowering in the pop-up garden this autumn.”

“We are so pleased to be working with such a diverse range of community groups across Birmingham for this co-growing project, which is a key part of the festival and its ethos. PoliNations is about celebrating the beauty, colour, and diversity that make up British horticulture and culture. For this particular project, we chose Marigolds, known as Shakespeare’s favourite plant and much-loved around the world. They are used in celebrations from Mexico to India, in food, and in medicine and have equally diverse origins.”

The idea for PoliNations grew from a simple but surprising fact: over 80% of the plants found in UK cities’ gardens originate from overseas. Across the festival programming, visitors will be invited to learn more about the incredible biodiversity of plant-life in the UK, the importance of our green spaces, and celebrate the equally colourful roots, journeys and histories of British people. In addition to live performances and talks, PoliNations will present a programme of events ranging from costume-making workshops with Joey Frenette (RuPaul’s Drag Race) and Clary Salandy (Notting Hill Carnival) to garden tours, story-telling, light shows, and more.

Trigger Collective, a multidisciplinary creative team of experts in horticulture, arts, science and architecture will be supported by local trainees to develop PoliNations across design, architecture, costume, sound, and production. The team is also collaborating with treasured local and national organisations to help bring the pop-up garden to life, including partnerships with the Birmingham Botanical Gardens, Royal Birmingham Conservatoire, part of Birmingham City University, the poetry and spoken word festival BBC Contains Strong Language, Paradise Birmingham, and the Bombay-inspired restaurant group Dishoom.

The festival programme, which will be announced in June, is poised to showcase a stellar mix of talent including Birmingham’s much loved drag performer Yshee Black. As part of her role as PoliNations Associate Artist, Yshee Black said she plans to bring together “a group of creatives from the world of Drag, dance and cabaret to celebrate the growth of the city, the people who inhabit the midlands, and personal growth to create a better lasting society for future generations”.

For those who cannot access the festival, as well as those who can, the PoliNations app, designed by agency Peter & Paul, is set to launch this summer. Audiences will be able to step into a virtual super garden, create flowers that are based on your thoughts and feelings and watch them come to life in augmented reality.

PoliNations is one of 10 major creative projects commissioned as part of UNBOXED: Creativity in the UK, which are the result of collaboration across science, technology, engineering, arts and maths and bringing hundreds of free events and activities across the UK in 2022. PoliNations is presented as part of Birmingham 2022 Festival in collaboration with Birmingham City Council.

“PoliNations perfectly embodies the two primary objectives of UNBOXED: to celebrate creativity and to bring people together. Their brilliant work with local communities is only the beginning of what will be a powerful celebration of the many facets of creativity and UK culture, as well as an awe-inspiring and joyous experience for diverse audiences.”